Be More Productive With Your Time – Interview W/John Lee Dumas 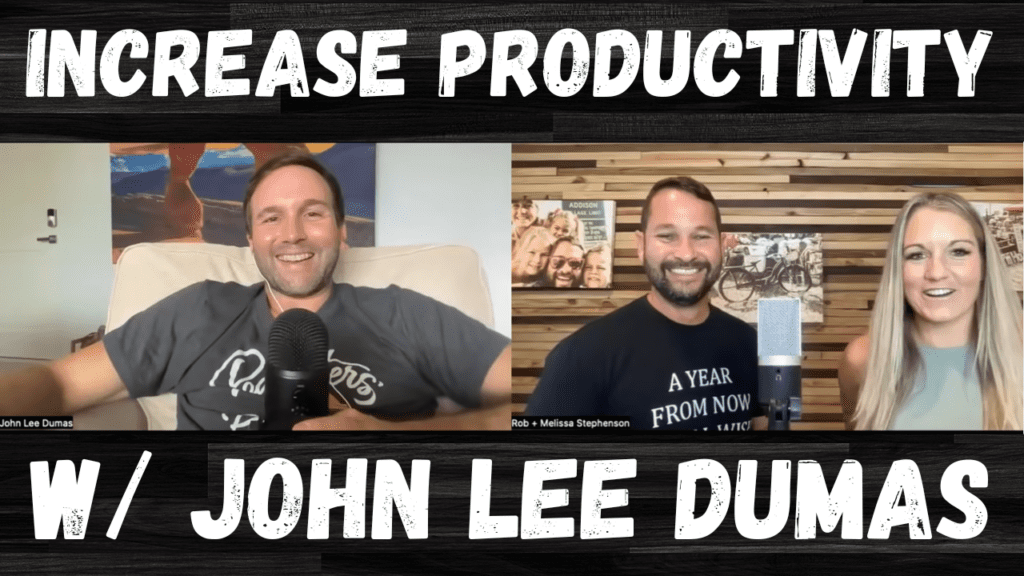 John Lee Dumas is the founder and host of the award-winning podcast, Entrepreneurs On Fire, where he has interviewed over 3,000 entrepreneurs. Today, he will talk about how he produces a daily podcast by working only one day a week. He’ll share tips for increasing efficiency and productivity in your reselling business.

How Did You Set That Pace And Keep It Going For That Long?

John says he had a lot of doubters, in the beginning, people who said it couldn’t be done. Even his mentor counseled against it because of the potential for burnout and the inability to find enough guests.

When he heard that, he thought it’d be quite the opportunity and cool if he could do it since the best in the industry were saying not to do it. He knew it would be a grind without systems, a team, or automation, but he knew those pieces would come with time. For the first year or two, it was about grinding it out.

He says he wasn’t very productive all the time because he didn’t know what being productive was for that type of business. He had to figure it out step by step. Every day he documented his process and found a way to become a little quicker and better, giving him a little more leverage and a little more scale. But he continued to produce a daily podcast and find guests.

And then, over time, John built the team. He made the systems and automation and became unbelievably productive. He’s now ten years into Entrepreneurs On Fire, with 3,700 episodes. He does a seven-day-a-week podcast. The best part is that he only puts in four work days per month. Every Thursday, he does seven to eight interviews for Entrepreneurs On Fire, and that’s it. He is running a multimillion-dollar podcast served 365 days a year by working one day a week.

What Was It That Drove You In The Beginning?

In the beginning, people at the top of their game told him it couldn’t be done, which made him want to do it. He wanted a seven-day-a-week podcast to exist in the world as a listener, so he wanted to prove it could.

He asked himself, “Where’s the daily podcast interviewing entrepreneurs?” because he would listen to that. It was a void in the marketplace that was being underserved.

What Would You Tell Someone Who Has Intentions But Struggles To Get Past Them?

John says the problem with what 99% of those struggling individuals, is they are seeing other people doing a side hustle or something like that that are having success, and they copy that person. Nobody wants a pale, weak imitation of somebody else. They want the true, authentic, genuine version of you.

For John, this phrase “not overnight, but over time” is what will help you win.

If you can truly identify a problem, you can become the best solution to it.

What Is Something That Could Help Somebody That Struggles With Productivity?

John says many people have dug themself into a hole where they’ve created a life that necessitates that they have that nine-to-five job. Then they’re getting home, tired, and don’t have the energy.

But there is a way out, and it’s not going to be easy because if it were easy, everybody would be doing it. John calls it to focus. If you follow one course until success, you will find it. Most people have many things they want to do, so they’re putting little effort into all these things and not moving forward because everything is divided. Well, what if everything was only divided by one?

Increase Productivity By Focusing On One Task

What if you put an hour into something, into one thing that was your sole focus? Now you’re going to make an impact. You’re going to make progress. And that is so critical, and it’s going to take what we call the five to nine, which is the 5:00 PM to 9:00 PM or for some people, to get that ball rolling. That’s the hardest part – that initial traction, that initial momentum, and then things start to work.

Eventually, if you can get that ball rolling a little bit and then a little bit more, then all of a sudden, you’re like, we’re making as much in our side hustle as we are in our actual job.

Now you can walk away from that job, and you all of a sudden have to do that thing all day to just focus, focus, focus. And that’s how it becomes exponential and compounds the right way. So it’s not going to be easy, but if you focus on one thing, and you know, it’s delayed gratification. It’s going to suck now, but guess what?

There will be a time when you’re sitting in Puerto Rico, and your legs will be kicked up. It’s your one day a month, you’re doing interviews on other shows, and you only have four days a month to interview other people for your show, and you have 25 days per month to do whatever you want.

You’re making multiple million dollars a year. That’s John’s story right now, and it took him years to get here, but he says it was worth it.

Have You Always Been Structured?

John says structure and productivity were not something he was born with but something he learned. When he was in the Army, he went to war for 13 months in Iraq, where he was a tank platoon leader in charge of 16 men and four tanks and avoided getting shot at. He says if you weren’t disciplined and focused, you were putting yourself and your soldiers at risk.

After the military, he started putting that discipline and structure into his daily life. It’s a step-by-step process at a time. John recommends using the Mastery Journal, which is about mastering productivity, discipline, and focus.

Is Community A Necessity To Grow Your Flipping Business?

Some people make hundreds of dollars from home by flipping thrift store items. This could be a side hustle or...

Taking the leap from part-time to full-time reseller can be a hard one to make. Consider these three things before...
Posted in Reseller Hangout Podcast